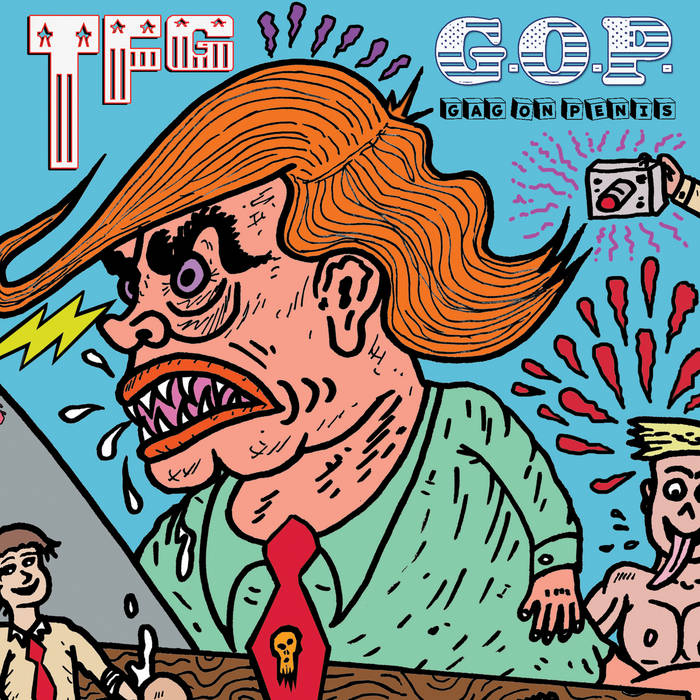 Shortly after the release, the record was dropped, along with 18 other TFG-related releases, from all digital distro outlets: iTunes, Google, Amazon etc, for violating the distributor’s standards (hate speech, pornography). "G.O.P. (Gag on Penis)" was re-released digitally 4.20.18

“Orange Anus” the first video/single, is a funny, psychedelic melange of republicans, politics, peni and hashtags.

“The Ballad of George Takei” the second video, is a love letter from TFG to Sexy Sulu. The video combines stop-motion animation, scantily clad action figures, and a slew of familiar enterprising faces.

Kneepad: “Orange Anus is a phrase I stole from Rosie O’Donnell, to express my disgust for the Conservatard-in-Chief, a reality show star with no political experience who got elected President. Trump knows how to manipulate the media. Nothing more. And if you’re not a rich, white male, his policies will hurt you. “

Between the majority of the American public supporting LGBT equality, and the current administration opposing cultural progress, the music and message of TFG’s Kneepad Nikki, Doc Octocock and Joe Testículo has never been more relevant.

The “G.O.P” cd cover & wraparound poster package is by MIKE DIANA, the legendary outlaw comix artist. In 1994, Mike Diana was charged with three counts of obscenity by a Florida court for his zines Boiled Angel #7 and #Ate. He was found guilty, sent to jail and sentenced to three years probation. He is the first person to receive a criminal conviction in the United States for artistic obscenity.

Enter the sonic gloryhole of TFG and the visual psychotic splendor of Mike Diana. The mix of indie electro rock, full frontal guitar and grindcore is dirty comedy at it’s dirtiest. If you’re against Trump, the conservative agenda, extreme religious fanatics in politics, or just a pervert who likes to laugh and rock out, choose TFG.
Enter TFG.world